Elementary students explore the relevance of the scientific method

Elementary students explore the relevance of the scientific method 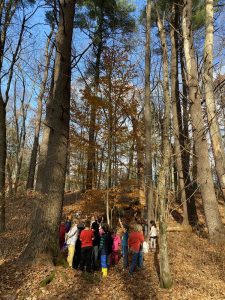 Some Lower Elementary students recently explored that question on a trip to the local Cobb Nature Preserve with our resident naturalist, Mr. DeFlorio. “When you use the scientific method,” Mr. D explained, “you start with a question. Today we are going to start with the question, how many different species of trees would we find in this entire forest? What would you guess?” The students voiced their guesses…4, 16, 30, 200. “Today we are going to use an ecological tool known as a transect survey which will allow us to determine the relative number of species of trees in this area.”

The students were all eager to find out, and to see which guess was closest to being correct. Mr. D divided the class of twenty students into four teams of five students each. He explained how each team would set up a 100-foot transect by walking in a straight line and marking the intervals of ten feet by using a tree branch. First the students collected sticks that would be easily seen in their transect. Then each group paced off ten feet, placed a stick at that point, continued to walk in the straight line another ten feet, placed another stick, and continued this process until they had marked off the entire 100-foot transect. 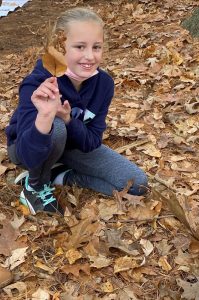 When the lab environment was prepared, he sent the students on their way: “go collect your data.” Groups each worked in a 10-foot interval, collecting as many different species of leaves as they could find in that interval. “Make sure you remove the ‘repeat’ leaves from each ten-foot area so that each leaf is different.” When they finished each ten-foot interval, they moved to the next interval and repeated the process.

While this was happening, Mr. D cleared the leaves from an area near the center and placed a large white mat on the ground with grid areas that would allow the teams to assemble and place all of the collected leaves together. When the teams had completed their transect collection, they brought their leaves to this white grid and sorted them based on the identified ten-foot markings. The next step was to eliminate all of the “repeats” in each of the ten-foot markings for the entire class. 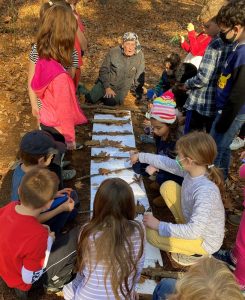 What was the result? How many different species of trees were found across the one-hundred-foot transects created by each of the five teams? The answer was seven. After all of the repeats were eliminated, the collection identified seven different tree species in the area surveyed. Most of the species collected were pine (mostly white pine) and oak (mostly red oak, white oak, and pin oak). They also found some beech tree species. “In most forest habitats like this one, you will not find more than about twelve species of trees,” Mr. D explained. The students were surprised by this. In such a large forest, with so many trees, they thought the number would have been larger.

Mr. D explained to me that he had five goals in this particular lesson:

“These concepts are important for students to understand,” Mr. D explained, “because they encourage stewardship, understanding, empathy and appreciation of nature.  They encourage the use of the scientific method in our daily lives to be proactive citizens, increasing awareness, sharing responsibility, and embracing challenges and solutions to problems.

At the end of the class, the students practice the habit of “leaving no trace,” redistributing the branches and leaves back in the forest in a natural way so that there is no evidence of the day’s experiment in nature.

Return to Head of School Blog